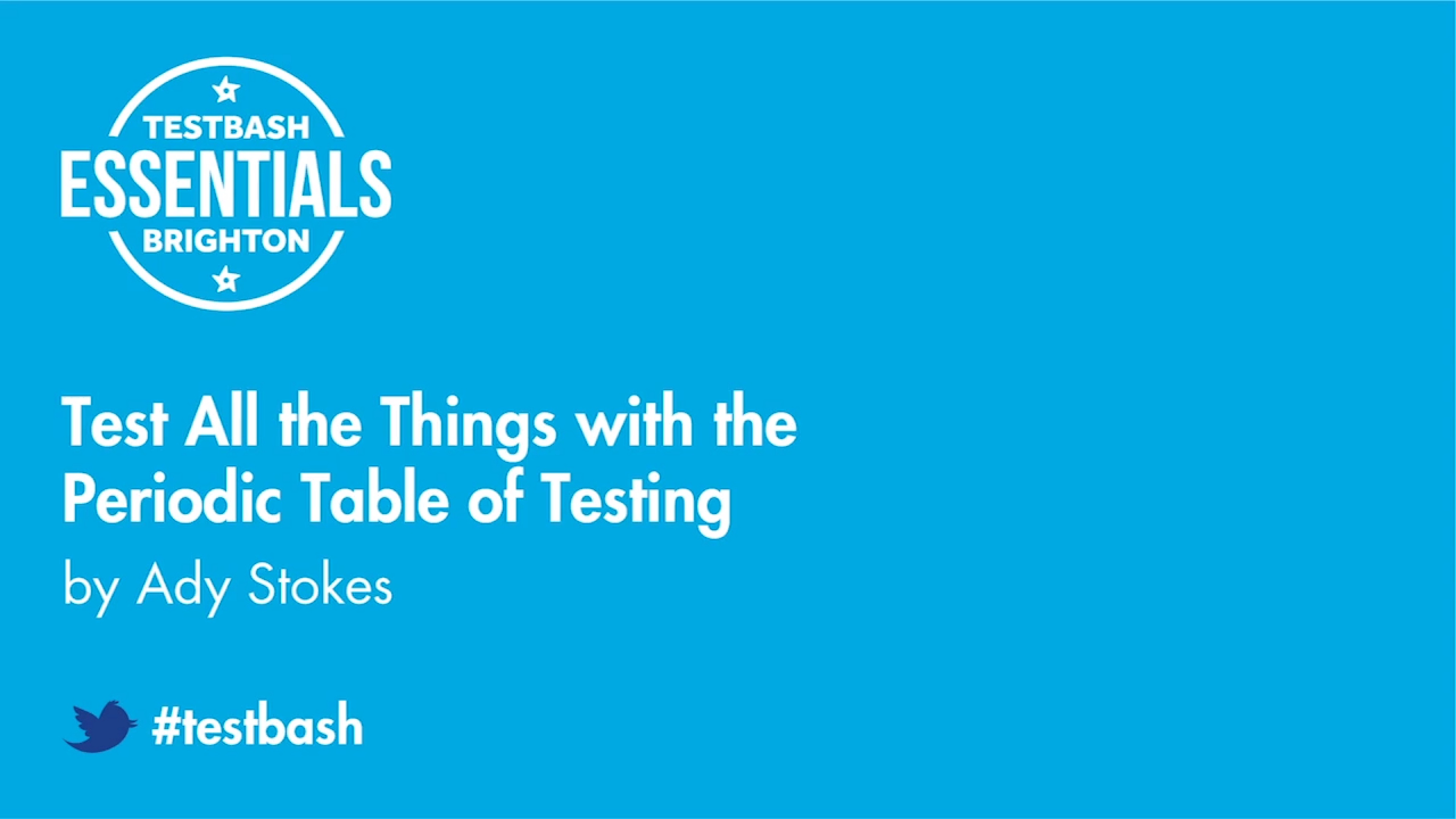 Ever wanted to test all the things but forgot something along the way?

Ever wanted to look at the vast testing universe and plan what direction you want to go or what you want to learn next?

Ever wondered how much you know or wanted to measure or evidence this to someone?

Well now there’s a one-stop shop to help you remember, plan your learning or show someone what you know.  A resource that will not only inform your decisions but hopefully inspire them!  A source so awesome it will let you look at your project from not just a test but from a manual, technical and a personal perspective too.  A visual heuristic that can help shape your learning, show the value testing brings and can assist in identifying the ‘what and how’ of a testing strategy or approach.

Introducing the Periodic Table of Testing.  A visual heuristic of the testing universe covering everything from manual to technical testing, from personal drivers to work methodologies.  In the beginning, I was a business user who did some testing.   It intrigued me and became my career.  I was ok, I tested what it should do.  The more I got into testing the more I read and learned, the more sophisticated I thought my testing became.  But essentially, the more things I uncovered lead to even more things I didn’t know I didn’t really know! The more I read the more confused I became about what there was, how it all connected and what paths of learning I could/should follow.  When to use what, how much of something should you be aware of, particularly specialisms like security.  There seemed to be multiple opinions, often contradictory, about what I should and shouldn’t be learning.  So I started making my own ‘list’ which grew and grew.  I tried various ways to visualise the information until I tried the table and that seemed to work well.

As well as highlighting how the table can be used I’ll share some of my experiences such as; the first time I had to do some testing on user access I thought I’d done well, thinking of different scenarios… until there was a production issue!  I’d covered user access but not all the roles.  From the investigation I found there were individual and service account permissions that were not taken into consideration.  That was when the ‘UA – User Access / Permissions / Roles’ element was born.  This led me on to thinking about penetration testing and looking at possible attacks.  Had the table been around then, I would have been able to at least ask questions that might have helped identify our test environment was set up quite differently to live.

The long term goal of the table is severalfold.

In creating the table and developing it to the point where it adds value to the above I’ve also been able to categorise the table into three distinct areas.  Those that really must be considered for every project, fundamentals, accessibility, data, etc. Those that should be considered dependent on the project, operating systems, capacity etc.  As well as those that could be considered. As part of the session you will also learn that no technique or ‘element’ lives in isolation.  Personas, for example, expose user journeys and tours. Accessibility testing exposes poor design and usability.  I’ll work through the table's sections explaining their aim, why they are split in that way and looking forward, what possible inclusions or changes are under consideration.  I’ll show how I think the table can be used to scope projects, direct your learning, help you gather evidence for your end of year reviews and even create better job descriptions and advertisements.

I’m not looking to make money by selling this.  I don’t even have advertisements on my blog, I just want to share my ideas to help people and keep improving it so it can be of more value to more people.