When Noel attended ATD, he had an experience that he felt he needed to write about. A story to tell about two remarkable women, testers, giving their time and talents to the community. When what’s not normal but should be, there is a need to make it visible and share the story. This is his story about Ash Coleman and Angie Jones.

What’s Not Normal Often Should Be

While going over my notes from Agile Testing Days USA, I began to group them into the stories that I knew would be relatively easy to write. One around why I think Bart Knaack told us that “You really don’t have to do CI/CD,” one on Erik Davis’ talk on “the natural evolution to ‘intelligent’ test automation,” and a feel-good piece I’m looking forward to writing about why “A healthy work/life balance won’t kill your products, but a poor one will,” based on an inspiring keynote from Alex Schladebeck and Huib Schoots.

But in those notes, I came across a single line, in bold, and highlighted in red:

There were no other details around it or notes to remind me why I’d jotted it down. There were only the “bold+red” markings I reserve strictly for “You have to write this one. No exceptions.”

The previously mentioned topics above are the types of stories I can churn out in my sleep. That doesn’t mean I think those stories have little value. They’re just simple, session-recap pieces that point out common challenges, misconceptions, and successes that the tech industry should easily relate to and can apply to their own work. I write about these topics all the time because they’re common, relatable, and ultimately, easy to get published. Thank heavens for Angie Jones and Ash Coleman? Why would I task myself with accurately conveying what’s so important about these two un-common women?

I wasn’t thanking God for the topics that Jones and Coleman discussed; I’ve seen them presented on stage many times before. Coleman talked about why so many organizations “deprioritize” testing (and how to change that), and Jones urged her fellow testers to evolve with, and not resist, the ever-changing world around them. These topics on their own are often covered at testing conferences, but they’re hardly tired or unnecessary. They’re both areas that testers have long-struggled with, and definitely still need to be covered by those who’ve found success in overcoming them.

What’s not a conference standard, and far from tired or played out? Seeing these topics presented on stage by women of color. Jones and Coleman are changing that, and we’re lucky to be here to watch them erase decades of systemic underrepresentation with strength, talent, confidence, and a well-earned, unapologetic swagger.

The Beauty Of An Introduction

While most speakers kick off their sessions by introducing themselves with an immediately forgettable bio and work history slide, Coleman’s deck began with the declaration, “I am savage.” This is…not normal, and that’s what’s so beautiful about it. I have no problem with “normal,” templated personal statements that toe the company line (I work in corporate communications and PR, it’s kind of a job requirement.) But like Laurel Thatcher Ulrich’s famous expression, “Well-behaved women seldom make history." And, while Coleman’s industry experience and technical skills should warrant sizable recognition for her work, is it enough to “make history?” It’s sadly not even enough for many women to be given serious consideration for some roles, or to receive equal pay should they be “lucky” enough to be selected for them. Making history, in any industry so dominated by male, well, dominance, requires the boldness to willfully clash with the world around you, and this is something Coleman’s race, gender, and voice each does in brilliant, dazzling color.

While Jones brings this same level of boldness in her on-stage presence, it’s done in her own entirely unique style. And don’t @ me about why style doesn’t matter in this industry. One look at the lack of women of color in the higher echelons of the world’s org charts reveals exactly which style has been given an easier ladder to climb, or, any ladder for that matter. 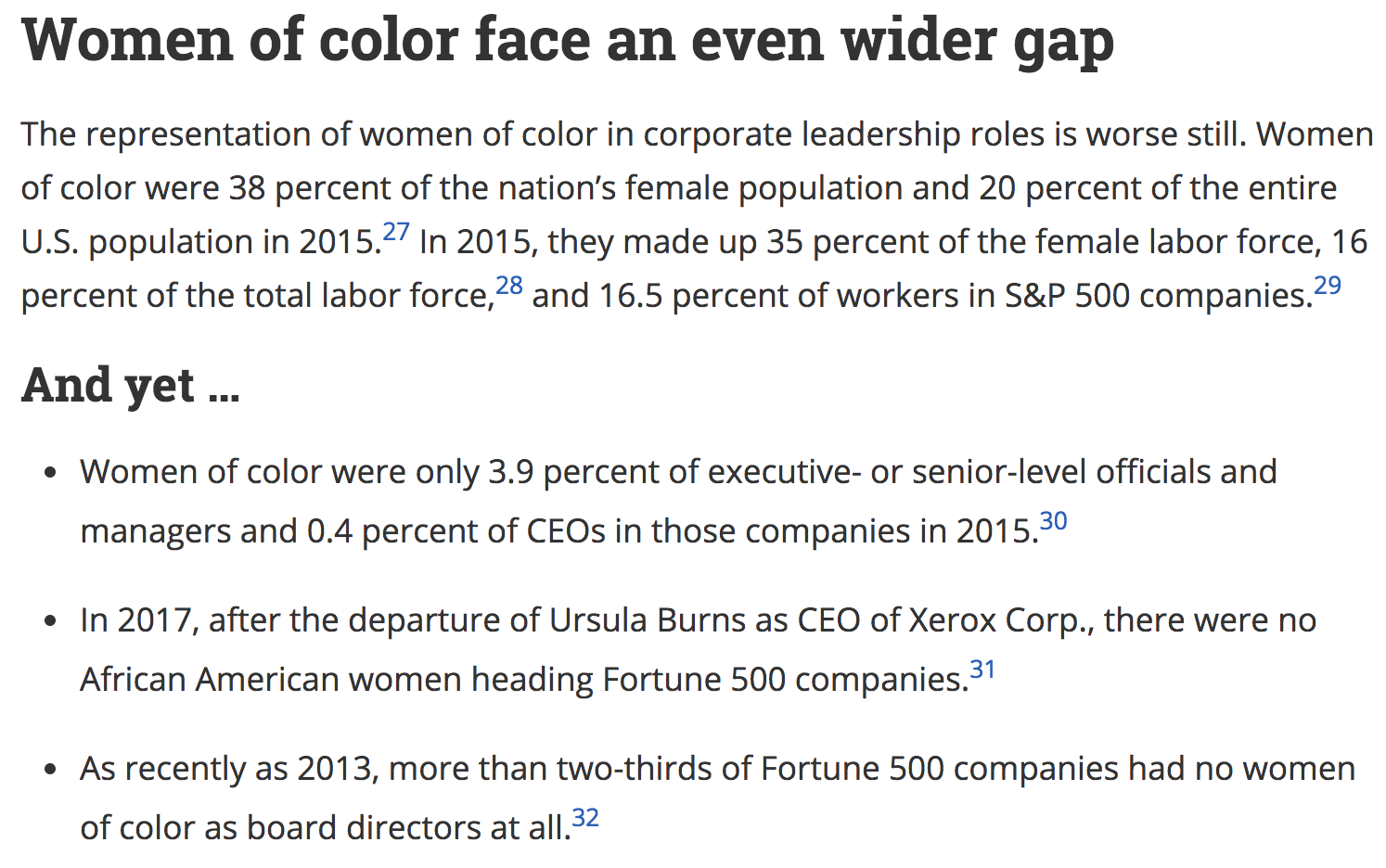 What Jones brings to a hard-to-imagine-how-she-does-it number of speaking engagements around the globe is the undeniable and impossible-to-hide impact that art, music, and society have on her work. Like Coleman, this…is not normal. Speakers are supposed to get up, brag about the enormous success of their company, share some common pain points—offer up some suggestions packaged in best practices gift wrap, and then share growth metrics that the majority of the audience can only dream of.

Whether she’s taking a minute to drift off to a Prince song, sharing screenshots of her Netflix watch history, expressing her excitement around trying on clothes in “smart dressing rooms,” or closing her session with a booming Beyoncé ballad—Jones is adding a level of visibility into her personal life that is incredibly rare, if not entirely non-existent elsewhere. And it doesn’t matter how relatable or shared her passions are with her audience. In fact, it’s hard to imagine that many in the predominantly-male audiences that she often speaks to share loves for shopping and Beyoncé, but her message is still getting across, and is increasingly in higher demand.

This refusal to accept that the only way to be listened to, and respected is to follow the blueprint of those who came before you may seem like a bold, or even risky choice. But for Jones, Coleman, and women everywhere, it’s increasingly being recognized as the only choice amidst all-too-common “boys club” cultures.

"Power is a funny thing; it derives its legitimacy from group recognition and sustains itself by the threat of exclusion. So the best way around it isn’t to participate in the power structures it creates – the systems of selection, obeisance, and reward – but to go around them and create your own."

Jones’ outstanding Agile Testing Days USA keynote, “Owning Our Narrative,” was a heartfelt message to all software testers seeing a world of change on the horizon and looking for guidance on how to face it. But, there was an obvious, underlying message being delivered to women, perhaps even directly to women of color, regardless of how few were present that day in the audience or not.

Jones and Coleman each own their narratives, and the plea they’re making to the world is that you own yours. Coleman’s session referenced the heuristic “The narrower the view, the wider the ignorance,” and, while it may have been originally coined for the testing community, every industry needs to understand its importance. When an organization, conference, upper management, board, etc., has excluded all but a single race and gender, they’ve narrowed more than their “view.” Their talent, customer loyalty, respect, and market share are all potential victims of their ignorance.

Jones and Coleman are in the midst of a stratospheric rise in a world that has, at best, historically ignored, if not shamefully excluded women of color. But, by being themselves and achieving tremendous success because of that choice—not in spite of it— they’re giving so many others the inspiration to do the same so that a sad reality today becomes what’s truly “not normal” tomorrow.

Noel Wurst has covered the software dev/test space for a variety of tech startups over the last 7 years. While “professionally” responsible for covering the tech industry from a product marketing perspective, Noel has a deep, personal interest in writing about gender-equality, diversity, and inclusive cultures. Noel is currently the senior manager of corporate communications and influencers relations at Tricentis.