As a comic book fan, I have a something of a soft spot for origin stories. I love finding out about the exact circumstances that come together to make something happen (or not happen!).

I also have a degree in biochemistry, and dreamed of lab work or research for a fair amount of my time in university. Then it turns out that the reality didn't match up to my dreams, and so I moved on - working in a pharmacy while I decided what I wanted to do, then moving to customer support in a startup digital agency. While there, I took over some work from our lone tester, realised I liked it, and the rest, as they say, is history.

While the story itself isn't that interesting, the leap from biochem to testing is interesting to me. And the more testers I speak to, the more I heard the same sort of thing: "I fell into testing, I was doing X and just ended up here." (Where X is development, or tech support, or project management, or helping out a friend).

All this lead to me putting a survey together, asking for testers to share their own origin stories. What I wanted to know was: if so many of us fall into testing, are there any common threads in where we came from, or how we got into testing?

I asked the following questions:

My aim for these questions was to balance getting the information I wanted and allowing free form answers. I wanted to get what people felt was relevant about their origins, not what I thought was relevant.

My thoughts around testing as a career were:

*My source for this is mostly anecdotal.

I wanted to see where the career path met doing the job - how long were people actually testing before they truly felt like a tester. This information interested me - while we can argue that everyone who does testing activities is a tester, self-identification as a tester has more intent - this is what I am, this is what I do, etc. It's becoming part of a role, and maybe a community, and so it seemed like relevant information for what I wanted to know.

Of course, this did mean that there was little to no consistency in the format of the answers, and I did a lot of reading and colour coordinating cells in a spreadsheet (conditional formatting ftw) but I found the answers illuminating.

I got 96 responses in total (97 if you include my test response #alwaystesting).

Did you fall into testing?

First, I had to ask if people did feel like they fell into testing. That was the basis of my survey, and so it seemed like a good place to start. I didn't define 'falling' in my question, which may have caused some confusion, but the answers show that everyone seemed to get at what I was asking. 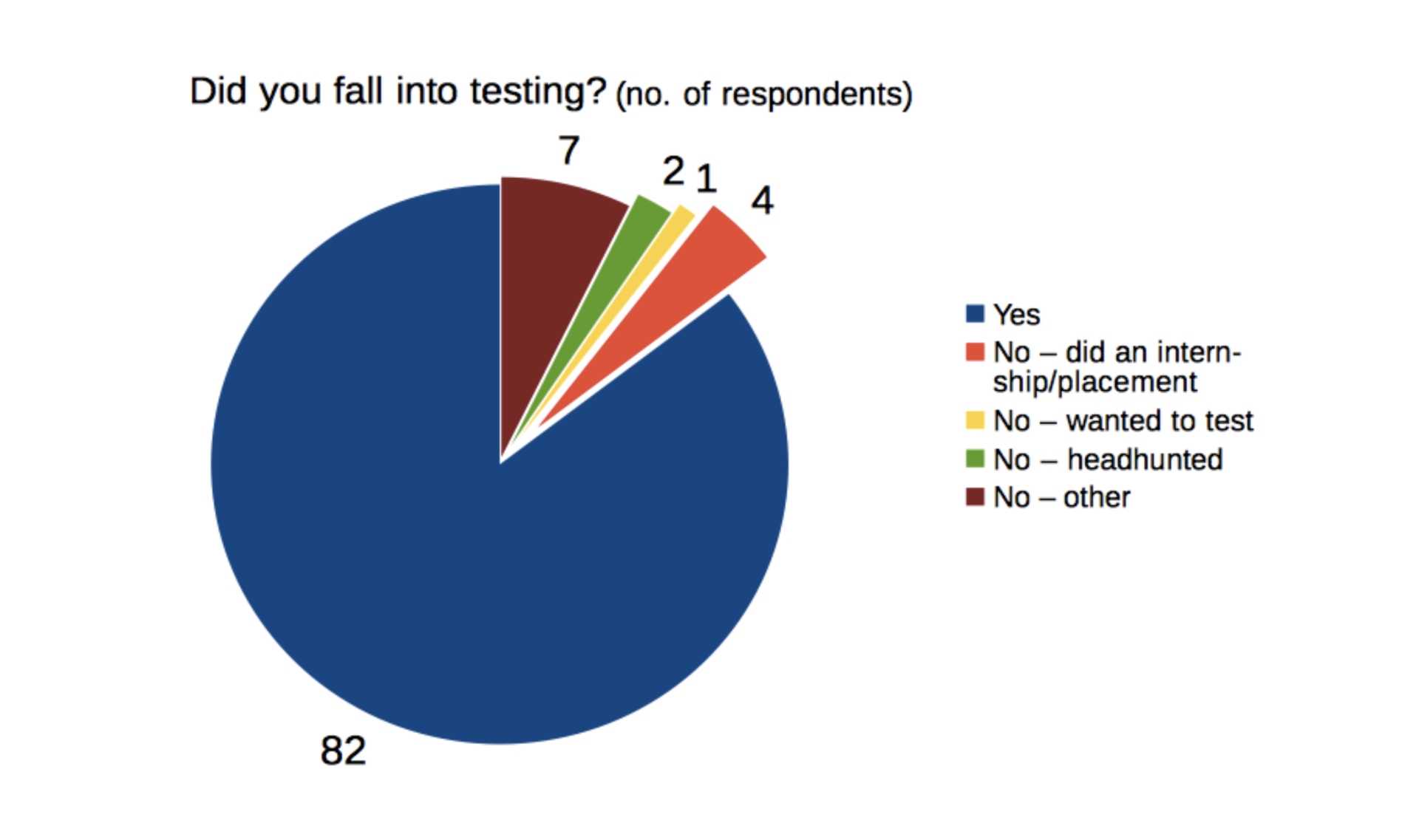 Overwhelmingly people said they fell into testing. Out of 96 responses, 14 people replied saying they tried to get into testing or were headhunted. This is what I had expected to find - I don't know many testers at all who wanted to be a tester before getting into testing. The one person who wanted to test wanted to move into the games industry specifically, which makes some kind of sense - as they said: who wouldn't want to play games for a living?

My first hypothesis being proven correct was a good start to the survey. Now we get to the individual stories, and the graphs get a little more segmented.

What was your first testing job?

I was interested in the first job people had as a tester. In hindsight, I should've asked what people's job before their first testing job was, but lesson learned. 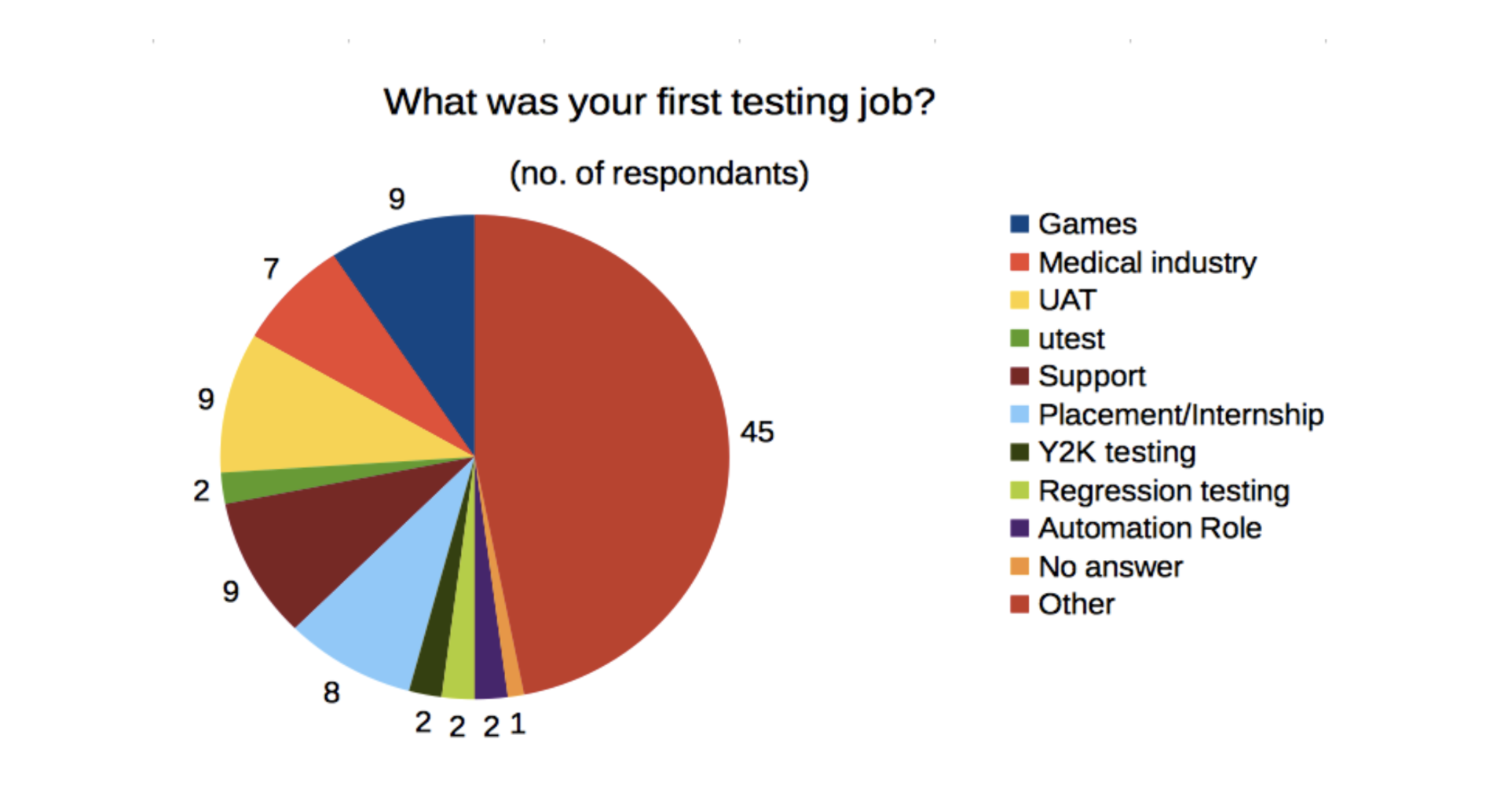 Just over half the answers could not be grouped in any meaningful way, and were far too varied to fit into a category.

Of the categories that could be created, the three joint largest were Games testing, UAT testing, and those people that came from support into testing (I can count myself in this latter category). The second largest category was placements or interns, which is fantastic. I wish we could get more people in straight from university, or straight from school. Let's start making testing an aspirational, not an incidental, career.

Amongst the 'other' category, there are career paths like people applying for a coding job and being offered a testing job instead, helping out a friend by testing their applications, or testing applications they were building themselves and realising they enjoyed testing.

I wanted to post this question because there are no community-wide qualifications that offer a stamp that makes you an official tester. You have to self-identify as a tester, either via a job title, or by declaring yourself a tester. That requires a certain amount of confidence, which is possibly part of the reason seven of the respondents either still don't feel like a tester or reported it taking upwards of five years to self-identify that way. 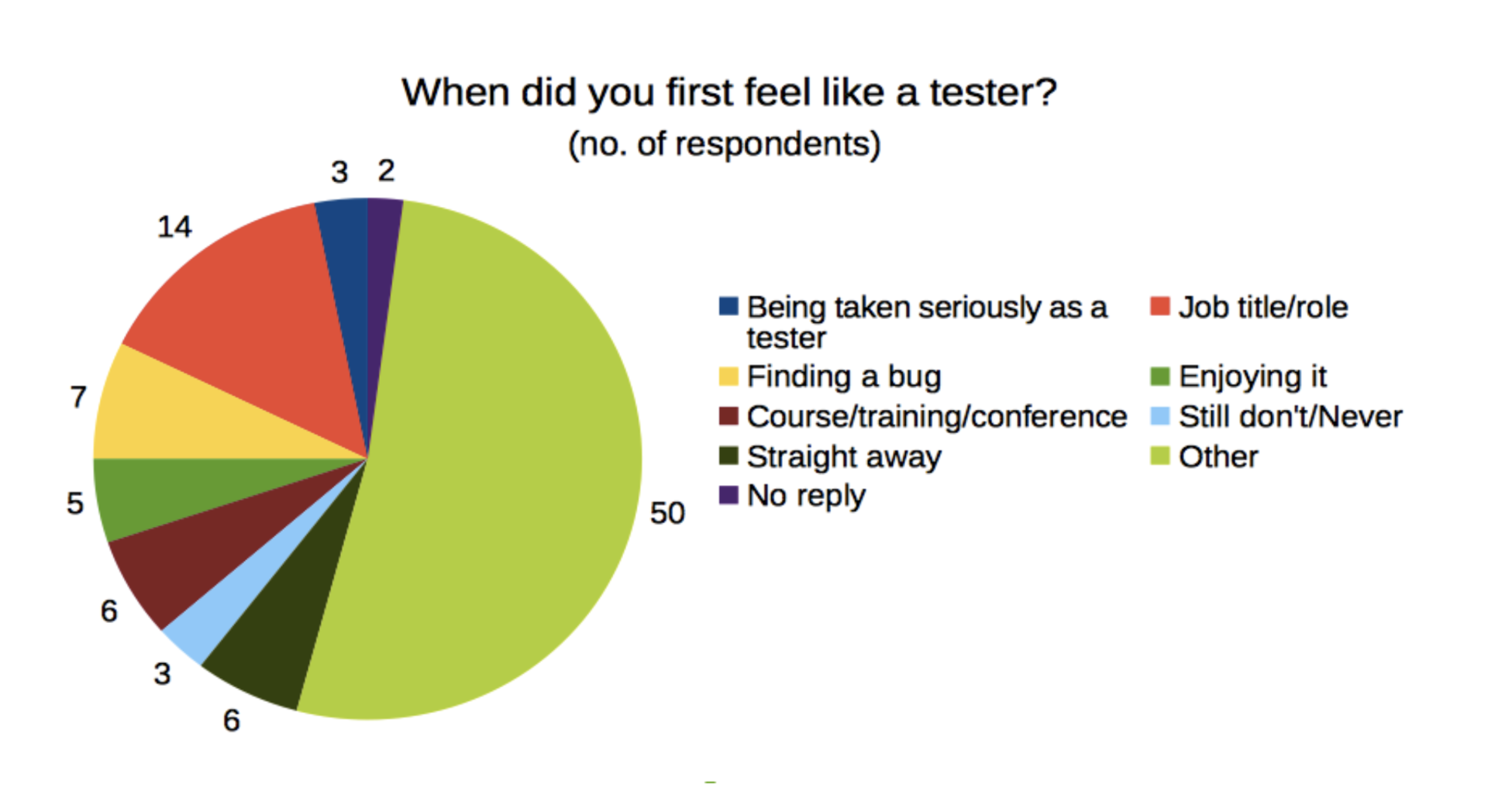 In the other category were people who didn't have a memorable moment, or it took a few months. One person reported feeling like a tester the first time they executed their first set of test cases. If you add up everyone who felt like a tester when they found a bug, or got a role in testing, or held the responsibility of a tester, you get the majority of respondents.

We're as varied as I expected. In fact, the only real similarity I can find in the data is that we're all so different. A lot of us took on testing to help out colleagues or other people around us and realised that we loved it (that's how I got started). Testers, for all our grumpy/contrary reputation, are a helpful bunch. We want things to be right and go well. We are willing to give time and energy to help things be the best they can.

I'm intrigued and pleased to learn that a small number of people had placements or internships out of university that involved testing. People unfamiliar with testing, or what it entails is a massive problem in the industry. If there are some courses, no matter how few, which mention testing and present those opportunities, then that's a great start.

I can't claim that testing is unique in that people just fall into it and change careers. The lack of a clear career plan and myriad types of testing can lead to people unsure if what they are doing is testing. I wanted to see, especially for people who did fall into testing, if there was a trend to that lightbulb moment that led to them first feeling like a tester.

I didn't expect this to be the most interesting part of the survey.

For some people, it can take years to feel like a tester, for others, it can take no time at all. Some people need to see that other people see the value of their work (I first felt like a tester when a dev team took my bugs seriously or when I found a bug in production, or when I delayed a release). Others from getting a role with "Test" in the title.

When people start looking into testing they are dropped into a fast moving community, with a lot of opinions and a lot to learn. I think that is more interesting than how people got into testing.  It's easy to get lost in what you don't know and forget all the stuff you do know, and can do. The Dunning--Kruger effect* is in full swing, and suddenly testers are unsure if they're actually testing.

Interestingly, fifteen people reported feeling like a tester during their first days or months, with a couple of people saying that testing was the right fit for them almost immediately. This, too, is interesting.

We know that people love testing, that they want to do this as a career, and that those people most often have never aspired to be testers. If we want more people in testing, we need to shout loud outside the community to make sure that other people know what testing is and why it's awesome. That's the only way we're going to make sure the right people realise testing is a career, and get them in the right place.

I learned a lot from this survey - a lot of lessons about how to refine and get better data, but also a lot of information about where we come from.

I think next I'm going to formulate a more in-depth survey about where testers come from. I want to find out where they were before they were testing, be more precise about the jobs they had or have, how long they've been testing, and what they planned to do originally. I think more work is needed to figure out where we should be shouting about testing to help target the message correctly. The answers need to be more structured to make any sort of attempt at analysis, and I'm going to take some pages from Rosie Hamilton's book, with her massive software tester's survey.

Thanks to all who took part! You're all amazingly awesome!

Gem Hill is a web tester at CTI Digital, specialising in Drupal testing. She has a testing podcast called Let's Talk About Tests, Baby, which covers all areas of testing. She lives in Manchester, with her partner Mark, and far too many comics and board games. She can be found on twitter at @gem_hill or @LetsTalkTests